Soaring from the seafloor like precious gems, The Twelve Apostles Rock Formations is no longer a secret and has long made it to the list of the most dramatic rock formations attraction in the world. 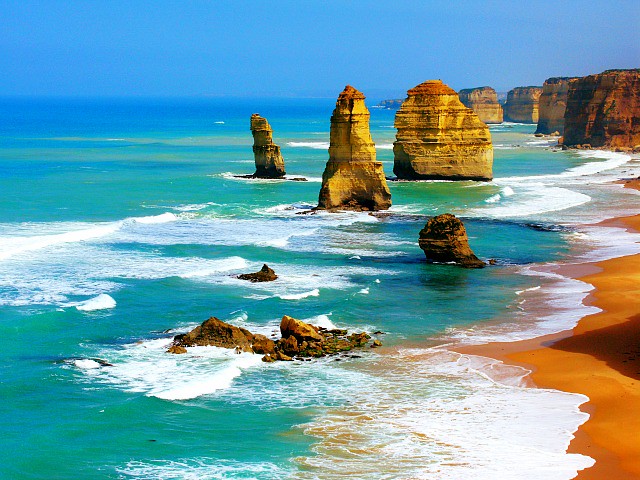 These stunning ochre limestone formations are scattered like stars off the coast of Great Ocean Road in Victoria, Australia. The 12 Apostles Rock Formations is a photographer’s paradise, the blasting winds and untamed waves crashing into the limestone cliff continued to reshape the islands for millions of years.  It has etched stunning swirls and ridges and the mammoth cliff gradually eroded forming towering gnarled rock formations. They are a beautiful blend of ochre and red set against the cerulean sea.  A walkway that has been built for the convenience of tourists. It serves as a viewing deck along the edge of the cliff.

Surprisingly, there are only originally Nine Apostles view-able from the city of Port Campbell to Peterborough, one has crashed last July 2005 narrowing it down to 8 stacks.  The name 12 Apostles was intended for tourism purposes, these dreamy rock formations where originally called The Sow and Piglets.  The Muttonbird Island near Loh Ard Gorge is the Sow while the smaller heaps were the Piglets.

How to get to 12 Apostles Rock Formations in Victoria, Australia:

This can be accessed by driving through the Great Ocean Road.

Many tourists prefer getting a package tour from Melbourne for about $130 per person which is usually inclusive of the bus tour of the highlights of Port Campbell National Park, entrance fees, breakfast and lunch.