Scaling up a mountain is not only for advanced climbers, it can also be done by amateur hikers in a day or two, depending of course on the difficulty of the heap.  Though we’re not really into mountaineering, we still have this desire to push ourselves to the limits and go scale some of the world’s most beautiful mountains.  So we’ve rounded up some of our dream climbs here and crossing our fingers that we can turn this dream into a reality in the near future: 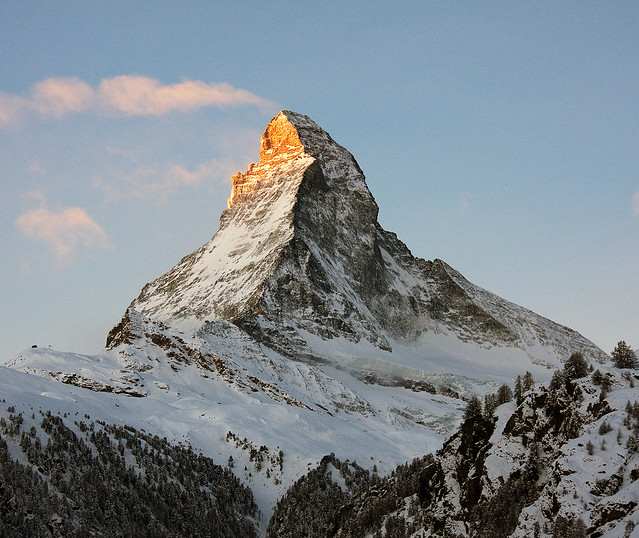 Damavand, Iran – Iran is undoubtedly an interesting place to explore, and so is its highest peak – Damavand (which is also the highest peak in the Middle East).  Thankfully, getting to this beautiful dormant volcano is no longer a problem as climbing it is now a popular activity in the region.  But that doesn’t mean it is fairly easy to scale up Mount Damavand, there are 16 known route and some are said to be extremely difficult.  It is hemmed by fumaroles, solfatara and thermal springs.  Another thing that caught our interest is, Damavand is linked with the Persian mythology, and there are proposals to register it as a National Heritage.

Matterhorn, Switzerland – Dubbed as the peak where mountaineering began, the lovely yet fairly difficult to climb Matterhorn beckons thousands of adventure seekers each year especially during summer when large crowd use the Hornli route.  This snow-peaked mountain is blissfully located in the Swiss Alps which was formed by nature millions of years ago during the separation of the Pangaea continent.  The trail to Matterhorn is hemmed by gorgeous larch trees, glacial crossings and alpine meadows.  Today, there are now cable cars and railways constructed around the territory to make it more accessible to tourists.

The Devils Thumb, Alaska – As the name suggest, this peak is shaped like a thumb and was featured in Jon Krakauer’s two books. The Devil’s thumb is nestled in the Stikne Icecap on the territory of Alaska-British Columbia border and many climbers find it difficult to scale up this snow-covered mountain.